The Most Expensive Medical Treatments

The meteoric  rise of out-of-control medical expenses  in the developed nations have caused a large segment of society who are either uninsured. Pundits  and economists  all over the world are unable to figure out what actions to take. Many countries around the globe including Thailand have similar healthcare cost issues affecting their population but to a much lesser degree. The government continues to spend a considerable amount of their GDP towards medical related expenses however, These escalating costs have led to a boom in medical tours and other health related vacations allowing ordinary citizens from worldwide to take control of their health by utilizing the surplus capacity created by Thailand’s globally renowned medical infrastructure.

The following is a list of the most expensive treatments in North America last year:

Asthma & COPD-$59 Billion: COPD or Chronic obstructive pulmonary disease includes chronic bronchitis and emphysema. COPD is currently the fifth leading cause of all death in America. Nearly 88% of all COPD cases are due to smoking tobacco. Treatments for COPD are an expensive solution so you should quit all smoking as early as possible to help reduce your overall risk. It is estimated that nearly 1 in 13 Americans today have asthma. Thats over 23 million people. Factors such as environmental pollutants and genetics are very important factors in rapid development of asthma in North America. 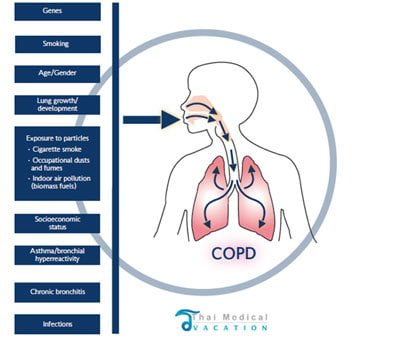